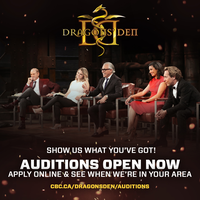 January 14, 2016 – It’s time for entrepreneurs across Canada to polish their pitches to be part of DRAGONS’ DEN’s extraordinary 11th season on CBC-TV. This February, producers will hit the road on a 33-city audition tour to find the country’s best businesses in need of a Dragon investment.

As seen on DRAGONS’ DEN last night, auditions will be open to the public and kick-off in Toronto on Feb. 6 in the Barbara Frum Atrium at CBC’s Toronto headquarters (250 Front St. W.). All audition dates and cities are listed below, and venues are listed online. Tour dates will continue to be updated through the DRAGONS’ DEN website (cbc.ca/dragonsden/auditions).

The audition tour will welcome participants of all ages, with businesses at any stage of development. Aspiring entrepreneurs should prepare to pitch their concept to the DRAGONS' DEN producers in five minutes or less. If they show the producers they have what it takes to pitch in the Den, they could be invited to Toronto to face the Dragons. Prospective pitchers are encouraged to apply online and bring a completed application form to the audition.

Online auditions are open now and will continue in-person throughout February, March and April across the country. Producers will be on the lookout for entrepreneurs in the following cities:

DRAGONS’ DEN DRAGONS’ DEN is one of the most successful Canadian unscripted programs and is currently in its 10th season. In addition to its success on air, DRAGONS’ DEN is also a hit online, boasting an active and engaged online community and averaging more than 450,000 page views per month. Full episodes and exclusive behind-the-scenes content can be viewed at cbc.ca/dragonsden. DRAGONS’ DEN is filmed at the CBC Broadcasting Centre in Toronto and airs Wednesdays at 8 p.m. (8:30 NT) on CBC Television. Tracie Tighe is executive producer and Molly Middleton and Amy Bourne are senior producers. Dianne Buckner hosts.

Canada CBC/Radio-Canada is Canada's national public broadcaster and one of its largest cultural institutions. The Corporation is a leader in reaching Canadians on new platforms and delivers a comprehensive range of radio, television, internet, and satellite-based services. Deeply rooted in the regions, CBC/Radio-Canada is the only domestic broadcaster to offer diverse regional and cultural perspectives in English, French and eight aboriginal languages.

A space for us all is CBC/Radio-Canada's new strategy to modernize the public broadcaster and ensure that it continues to fulfill its mandate for Canadians and for future generations. Through to 2020, it will
increase its investment in prime time television programming, and continue to create radio programs of the highest quality, while promoting the development of digital and mobile platforms and content.